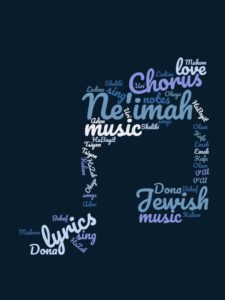 Ne’imah Jewish Community Chorus (Ne’imah) was founded in 1992 in Albany, New York by Rosemary Linsider, an active member of the local Jewish community. After listening to the Zamir Chorale, Boston’s premier Jewish chorus and the first modern Hebrew-singing chorus in North America, Rosemary fell in love with the beautiful Jewish choral music that they performed. This inspired her to found Ne’imah Jewish Community Chorus. Rosemary became a chorus member and its manager for more than 10 years. Ne’imah became an important art organization in the Capital District and has brought beautiful Jewish choral music and renowned guest performers to the Capital District for over 25 years.  Rosemary moved to Israel in 2010 and Ne’imah’s membership strives to keep her dream of bringing Jewish choral music to the area alive.

In 1996 Ne’imah became a not-for-profit 501c(3) corporation, independent from all Jewish or non-Jewish organizations, synagogues or agencies in the Capital Region. Ne’imah’s concerts are of a social nature and are designed to bring the community together.

Ne’imah is a volunteer organization and has two paid contractors, the conductor and piano accompanist, and volunteer staff: librarians and president/manager.

As part of its mission, Ne’imah has acquainted residents of and visitors to the Capital District with the variety and richness of the Jewish choral music repertoire, ranging from original works written by contemporary Jewish composers to choral arrangements of existing Jewish folk and liturgical music.

Over the years, Ne’imah has performed at the North American Jewish Choral Festival, at Friends of Albany Public Library interfaith concerts, the Unity Concert at Hudson Valley Community College, the MOHO Arts Festival at Proctor’s Theater, at Jewish Federation and synagogue events, at Daughters of Sarah Nursing Center, The Massry Residence, and at many other venues in and around the Capital Region.

In June 2012 Ne’imah celebrated its 20th anniversary by organizing, hosting and sponsoring the first Albany Jewish Choral Festival. Several local choral groups from synagogues from the Capital Region celebrated this milestone together with Ne’imah. It was a very successful event. Ne’imah’s 25th anniversary was marked by a special collaboration with Cantor Meir Finkelstein, composer of many common liturgical tunes and performer of an eclectic repertoire.

Ne’imah has received support from the Jewish Federation of Northeastern New York, the Golub Foundation, and Capital District businesses and individuals.